It’s the next entry in our ‘Ask a forester’ series. This time we talked with 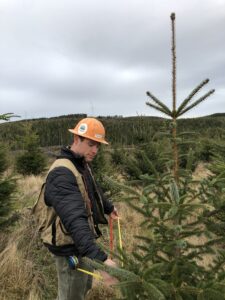 forester David Dougherty from GreenWood Resources. We’re delving into the difference between the average tree in a managed forest compared with an average unmanaged forest tree.

A: In my experience, managed forests create the healthiest and fastest growing trees.

On the coast there are several tree species that grow in abundance. Millions of seeds from these species can be dispersed after a natural disturbance or a harvest. Left on their own, they would create thickets of young trees mere inches from each other across the landscape.

Without management techniques to thin them, too much competition between trees leads to a reduction in tree vigor, which can leave them susceptible to insects, fire and disease they would normally be able to fend off. Through a management technique called ‘pre-commercial thinning’ we are able to selectively remove some trees in order to maintain healthy, resilient forest conditions and increase the size and growth rates of the remaining trees. This advances the entire stand down the path towards their set of desired future conditions.

Without forest management, we would have an entirely different outcome. The trees would fill in and quickly the forest would become stagnant, trying to grow more trees than the site can support. Competition for resources causes the whole forest to weaken, potentially allowing insects, fire, disease, and other forms of disturbance to kill trees. On the off chance that the stand does not encounter a natural disturbance, it could take 100 years for the unmanaged forest to produce a tree of the same size as the managed forest could produce in the matter of a few decades.

We’re focused on actively and sustainably managing our forests in Oregon.